One of the most confusing subjects on guitar is scales. This article gives an introductory rundown on guitar scales to help clarify the topic. 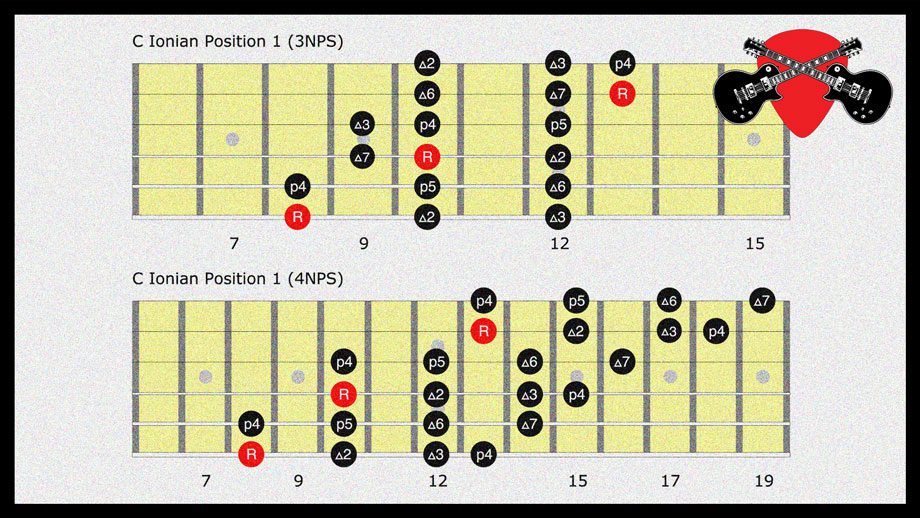 From Major to Mixolydian, one of the most daunting aspects when learning any musical instrument is the subject of scales.

When I first started playing guitar, learning scales seemed to me a labyrinth of information to navigate, and honestly they were.

Using the Major scale as an example, I’ll try my best to explain this vast topic, and how the guitar utilizes scales in a unique way compared to linear instruments.

Note: The topic of scales is much too large for one article, so I have a ‘Lead Guitar And Scales’ category on this site. Here, I’ll give in depth lessons on this subject.

Guitar scales from the beginning

Our eyes see colour as vibration at a certain frequency, in this same way; our ears hear sound. These two things belong to the same spectrum; it’s just sound vibrates a lot slower and so our ears are the vessels interpreting this information.

If you look at a rainbow, you’ll see no definitive line where the colours blend from one into another. If you look, red doesn’t just turn to orange all off a sudden; one colour blends slowly into the next. Sound works the same way; an A doesn’t just turn into A#; it slowly blends.

How does this relate to scales? Let’s make a long story short. Western music has divided the sound spectrum into 12 tones and labelled each one (figs.1a and b show this on the A string of a guitar). This is the ‘chromatic scale’ and the first scale we should learn. Music is a language, and the chromatic scale is the alphabet.

In figs.1a and b You’ll notice one diagram using # (sharp) and the other b (flat); these notes are the same tone (enharmonic) and can be labelled either way.

Also, we call each note in a scale a ‘degree’, and each degree is assigned a number. In my article ‘An Introduction To Guitar Chords’ I give an example of how chords are created using degrees.

I won’t go into the science of the harmonic series, so I want you to take for granted the next scale we come across is the ‘major scale’ (also called Ionian when referring to modes). This scale has a happy sound, and we use the name major because we create the majority of our music using this system.

Unlike the chromatic scale, which uses every note of the musical alphabet directly side by side, other scales are a combination of tones and semi-tones. Taking this information, we construct the major scale with the following formula:

This is a ‘diatonic scale’, meaning a scale consisting of seven notes. Other scales exist with more or fewer notes and sometimes using intervals larger than a tone. If you find yourself confused, remember we’re just organizing groups of notes from the chromatic alphabet to create a scale.

Applying guitar scales on the fretboard

I hope you understand the concept of how to construct a scale because it’s time now to apply them to guitar.

Unlike a piano, which lays the chromatic scale out in a linear fashion, and there’s only one way to play any note, the guitar is multidimensional, and we can play the same note in multiple places on the fretboard. Taking this into consideration, there are numerous ways to play scales, and I’ll explain what I think the four most common are.

Single String: If you understood the concept of ‘Fig. 2’ you should find visualizing scales on a single string easy. You literally play them up and down one string.

Positional Box Form: These are probably the most common patterns for people to first start learning (Fig. 3). They consist of five different finger patterns and relate to a chord from the CAGED system (more on this in another lesson).

I like to play like this when using the ‘pentatonic’ (Fig. 4) or ‘blues’ scales (Fig. 5), but I don’t think they’re that great for playing diatonically. For this, I prefer ‘3 and 4 note per string’ patterns.

3 Note Per String: Using these patterns the diatonic scales fall under your fingers. We have seven different finger patterns created by playing diatonically with 3 notes on each string (Fig. 6).

4 Note Per String: Just like the 3 note per string, 4 note patterns consist of seven different patterns constructed in the same way, only now we play the diatonic scale with 4 notes per string (Fig. 5).

I love the layout of these and the 3 note per string patterns for navigating around the fretboard.

Take note, these 4NPS patterns share two of the same notes between each octave; in this case the P4.

Understanding how we create guitar scales, and visualizing them between all four of the ways above will open up a world of possibility when learning the fretboard.

Although there’s way too much to cover in a single article, I hope you have some grasp of what I’m trying to explain. It takes a long time to learn this stuff, but as I said earlier, I’ll be going over this subject in much more detail as I add more lessons to this site.